Milford, originally known as ‘Campbells Bush’, named after a Mr Campbell who looked after the property on either side of what is now known as Kitchener Road.

The name today is generally believed to originate from the home land (Milford On Sea) of Mr Edwin Harrow who owned a grand 2 storey Edwardian hotel in Killarney Street,Takapuna. 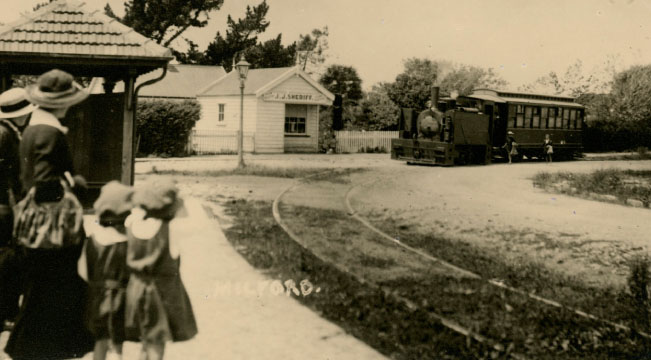 Inspired by the success of the electric tramways in central Auckland, some North Shore entrepreneurs decided to construct their own tramway which would take people from Bayswater wharf to Takapuna with a loop around the back to Milford, then to Takapuna and back to Bayswater and so the Takapuna Tramways and Ferry Company Ltd was formed. As electricity was still not available readily on the North Shore a steam tramway was constructed. This was finished in time for the summer 1910.

Due to increased competition by Devonport Steam Ferry and North Shore Transport bus companies the tramline, as well as the development of concrete roads, the business was closed in 1927. It had provided holiday makers with an excellent opportunity to see the Milford area, and showcase it as a fantastic holiday and weekend destination. It was an important aspect of Milford’s growth in this era.

In the 1920’s Milford rapidly became a leisure and entertainment destination. In 1922, two pictures theatres opened to the public.

The Bridgeway Picture theatre (later renamed the Green Mill), owned by Mr Putty Brown, was built by the bridge at Wairau Creek; it was intended to harness the water flow for electricity to run the establishment.

The Milford Picture drome opened at the other end of the village in Milford Road, owned by local surveyor and property developer, Laurie Speedy. On Saturday nights, the drome offered both silent movies and dances, with a gang of youths employed to swiftly convert the theatre to a dance hall after the showing of the film. This was immensely popular with people from all over Auckland.

Ye ‘Olde Pirate Shippe’ was constructed by James Fletcherin 1928 and opened January 1929. The building itself was shaped like a ship, hence the name. The venture was undertaking by a group of business men who saw the success of the Picture domes in the area and decided to replicate it. They formed Milford Amusements Ltd, with a capital of 10,000 pounds ($20,000) to undertake the venture. The building offered a dance hall, tearooms, sweet shop, a penny arcade and a restaurant.

A short while after the buildings a construction a swimming pool was constructed, that along with the beach nearby made this the new hot spot to be across the North Shore. The pool was very popular with school children, a big attraction was the high slide which tested the youngster’s bravery. After changing many hands of ownership the building was eventually abandoned, it was finally demolished in 1957. 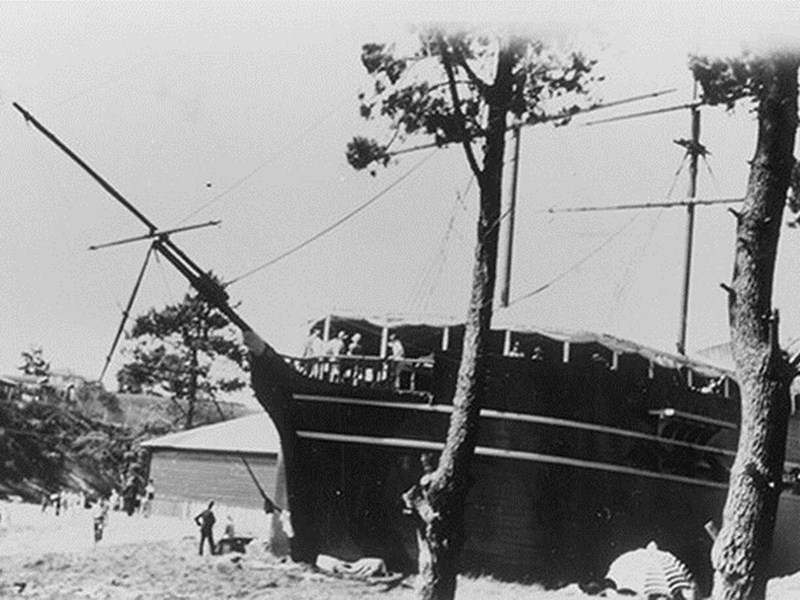 The opening of the harbour bridge in 1959 brought about a steep increase in the number of permanent residents to the towns on the North Shore, including Milford. This was the point at which Milford began to transform from a holiday and entertainment destination to the residential village it is today.

The effect on the population growth that the harbour bridge would have was grossly underestimated, only 10 years after the bridge was built it was realised the lanes would have to be expanded from the original 4 lane bridge.

In 1957 plans begun for the development of what is now the Marina area. By 1960 a council scheme proposed turning the Estuary into a non-tidal lagoon by installing lockgates. In 961 Milford Cruising Club moved 200 tons of concrete blocks from Tamaki River to form a groyne on the southern bank of Wairau creek mouth. The first part of Milford Marina consisting of 89 berths was constructed in 1968. In 1975, 112 berths were constructed. Today the Marina is now home 220 permanent vessels, a vast improvement from the days where boaties had to wrestle mangroves to find a place to moor their boat. 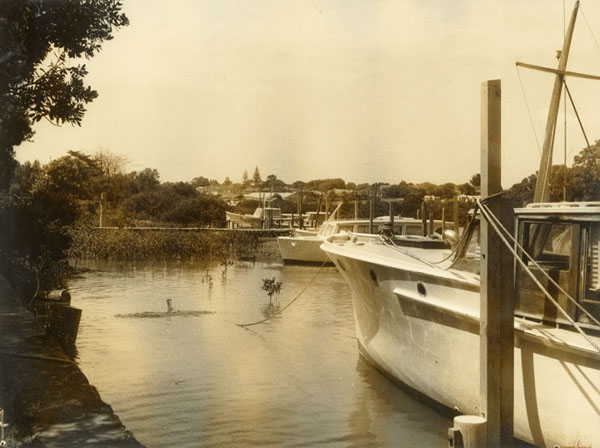